Our company has a long legacy of product remanufacturing and recycling. We started our product take-back programme fifty years ago, and since then we have recovered millions of pounds of equipment and components for reuse and recycling. Today, 95 percent of our mailing equipment parts are recyclable. We have established centres throughout the United States, Canada and Europe where customers can return products for subsequent remanufacture, harvesting of parts or recycling. Last year equipment remanufacture diverted 298,183 pounds of waste from recycling to reuse.

We have a robust remanufacturing process that has kept more than 2.1 million pounds of products out of our waste streams in the past five years. 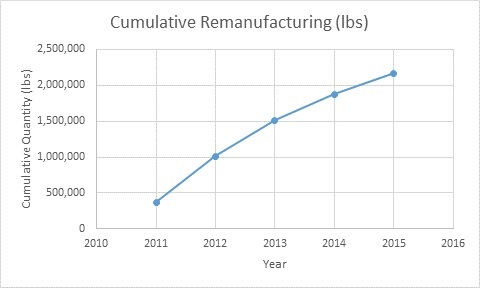 Over the past few years, Pitney Bowes has focused on reducing waste from the point of generation, with particular emphasis on office supplies, such as copier paper (one of our largest volume/spend items). Steps taken since 2013 have included the following:

These initiatives have led to a continuous decrease in paper usage. In just two years, usage in the company’s Connecticut offices has gone from 8.7 million to 4.1 million pages—a reduction of 53%, as shown below. This equates to saving 1566 trees* per year from our 2013 baseline year.

Throughout the first week in June 2015, Pitney Bowes offices in Noida and Pune held a series of events to encourage employees to adopt environment-friendly products and practices at work and at home. Most events focused on ways to reduce consumption of water, electricity and paper, but the week also highlighted positive steps, such as the planting of trees throughout the grounds around the two facilities.

The long tradition that Pitney Bowes has of product recycling, remanufacturing and reuse aligns perfectly with European Union directives aimed at a circular economy. Our Harlow Mill facility takes equipment from clients across Europe at end of life for remanufacturing and parts salvage. In 2015 the facility remanufactured 21,454 units, thereby avoiding approximately 754 tonnes of waste. In addition, by recycling 128 tonnes of electronic waste, the facility achieved a 95% recycling rate, well in excess of the 65% recycling target set by the EU’s WEEE Directive.

The core values of sustainable manufacturing are evident throughout the remanufacturing process. Water used to clean ink contamination from parts is constantly reused until too dirty. The water is then sent for treatment, filtered three times, to remove ink particles, before being made available for use again. In keeping with these values, in 2015 the Harlow Mill remanufacturing operation was re-certified to ISO14001 as well as OHSAS 18001 certification through third-party verification.