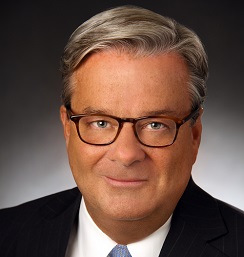 Bill Hughes is Chief Communications Officer at Pitney Bowes Inc. In this global role, he directs communications for employees, the media and other influencers. He also oversees government affairs and works closely with the marketing and investor relations groups.

Bill joined Pitney Bowes in 2013 with more than 25 years of communications experience, having worked at both large corporations and small companies, across information technology, pharmaceutical, financial services and consumer products industries. He also has extensive international experience.

Previously, he was Chief Communications Officer at CA Technologies, one of the world's largest IT management software companies.  He was responsible for media relations, executive and employee communications, digital media, sponsorship, government relations, community relations and corporate social responsibility. Before that, he had served as Vice President, Global Communications and Public Affairs, at IMS Health, the world's leading market information company to the pharmaceutical and healthcare industry.

Earlier in his career, Bill spent more than 12 years at Burson-Marsteller, WeberShandwick and Miller Communications. While at WeberShandwick, he worked in the London office.