Did you ever get the feeling you were being watched?  We have, and it’s now been happening for years. For the third year in a row, Pitney Bowes has been named a CRM Watchlist Winner.

CRM Watchlist is a prestigious, annual impact award created by leading CRM analyst Paul Greenberg, Managing Principal of The 56 Group and best-selling author.  The Watchlist recognizes companies that have had a significant impact on the CRM market over the last year and are poised to continue to shape the industry.

According to Greenberg, “The CRM Watchlist is an impact award. It’s an award that identifies the strength, mindshare, and market share a company has in the markets it addresses – or tries to address. Watchlist is designed to find companies who have not only had a significant impact in the market the year before (hence the 2017 Watchlist looks at 2016) but also are built to continue having that impact in the following approximately three years.”  The Watchlist submission considers answers to questions in 12 categories including strategy, culture, vision, partnerships and market impact.

For the 2017 award, there were 136 submissions and only 27 winners.  Among the winners were Salesforce, Adobe, Microsoft, SAP and Pitney Bowes (our third year winning).  This year’s award was more difficult to win that last years’.  Greenberg stated that due to adjusted thresholds, 20% of the 2016 winners would not have won with 2017 criteria. 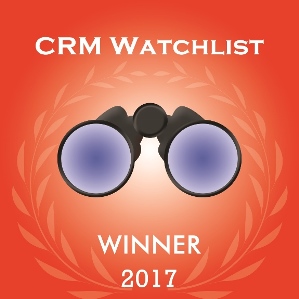 Besides identifying winners, Paul Greenberg identifies market trends based on what companies outlined in their submissions.  For 2017, there was a definite trend regarding Artificial Intelligence (AI). A significant number of companies had or were planning to incorporate AI capabilities.  In addition, companies were also looking to offer robotic process automation in one form or the other.

From Data to Delivery

Few companies approach the CRM space quite like Pitney Bowes. Rather than competing with traditional CRM vendors, we augment and extend CRM solutions. Pitney Bowes’s primary differentiation comes from the breadth of its portfolio and access to data sets that enable clients to optimize the entire value chain and deliver true customer engagement across the customer lifecycle. Our software solutions enable clients to start with consolidating customer data from myriad sources, create rich customer profiles, craft personalized digital and physical communications, orchestrate these communications across channels, and deliver unique customer experiences at the right time in the customer’s channel of preference.

Want to learn more about digital transformation and the customer experience?  Don’t miss our webcast with CRM - Innovations That Drive Superior Customer Engagement – on March 22nd.

Digital Transformation: Why the Rush?

Fueled by rising customer expectations, digital transformation has to be top of mind for CEOs and CXOs.